The more time that passes before I finish these race reports, the less likely I'll be able to remember which race was which... Just kidding, I've completed 4 races in the past 2 months, but 2 were road races and 2 were obstacle races, and they were all different distances. A pretty well rounded collection actually! 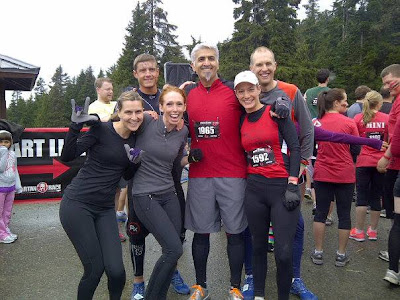 The Spartan Sprint on June 1 was my first Spartan Race of 2013. The "king" of obstacle course racing, Spartan is the original OCR organization and they've really set the bar for the various other mud and obstacle races that have appeared in the last few years. Definitely my favorite race series, Spartan races are all about strength, speed, agility, balance, grit, and in the longer Spartan distances, endurance. Competitors are fierce, well trained, determined, and adventurous.

Personally, I  thought the entire race was amazing. Package pick-up was the day before, so there was no messing around with line ups on race morning. Racers were divided into decent sized waves, so traffic was good getting to the race itself and into the starting corral. I raced in a group of 5, 3 women, 2 men, all of somewhat similar fitness level.

As for the course itself, it was typical Spartan, with one major unforeseen issue causing a number of last minute course adjustments: snow. June in Vancouver is usually warm, and the majority of snow has typically melted from local mountains by late May. But not this year. The course was essentially a bent figure 8, consisting of two loops which intersected in the middle. We started at the base of the "Mystery" chairlift, and followed one of the intermediate ski runs up to the top of the chairlift, and back down a different ski run almost to the start line, before veering off to the left and down to the lower half of the course.

The top half,or first loop, of the course (approximately 3k) was 100% covered in snow, about calf-deep, making for some interesting running! Obstacles faced in the first loop included over/under fences and barbed wire, pulling a 30lb cement block for about 40 feet, a sandbag carry up and down a hill, and even a little a bum-slide in the snow. We speed walked up the hill, ran down, and completed the first loop in decent time.

Loop 2 was where they had placed most of the obstacles, because it was snow-free. First up was the monkey bars, where I, far too excitedly, leaped out onto to the bars, my swinging legs following. In fact, my legs swung so far forward, my hands let go of the bars and I fell the 10 or so feet to the gravel below, landing entirely on my lower right arm. While I attended to the blood gushing from my arm, my teamates split my 30 burpee penalty (for failing to successfully complete the obstacle), and we continued on. Other obstacles in leg 2 included climbing up and over cargo nets, down and up through a steep muddy ravine, crawling through mud under barbed wire, up over walls, a javelin throw, a rope climb, traverse wall, tire toss, fire jump, and gladiator fight. There may have been a couple more that I've forgotten, too.

We kept up a good pace throughout the race. There were a few times the team stopped and waited while teammates completed burpee penalties or made it up hills, before finishing together as a group, in a time of 1 hour and 12 minutes. Could I have completed the race faster? Definitely. Am I happy with the time? Totally. I didn't go into the event with a goal to finish as fast as I could, I wanted to run it as a group and have fun. And that's what we did :) 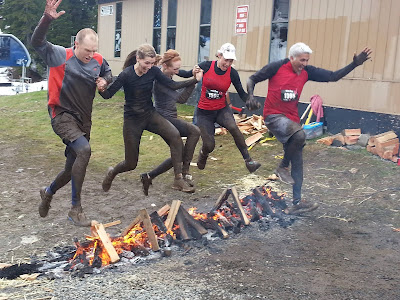