So this past weekend we went up to Nicola Lake to camp for a few days. As we're packing up extra infusion sets, reservoirs, dex, and a couple of glucagon shots, Dylan says to me, as a joke, "Don't forget the insulin, Mom."

"No way," I reply, chuckling. After all, I had just picked up a fresh vial from the pharmacy the night before so that we'd have more than enough for the trip, and for the site change we'd need to do while away.

Two hours later, we're in the car, entering Chilliwack (about an hour from home), when Dyl's pump beeps low reservoir. And then it dawns on me. I packed all the d-supplies from the cupboard but left the fresh and the old vials of insulin in the butter compartment of the fridge. Holy crap!!

Option 1? We could go back, but it's at least an hour home, and we're smack in the middle of rush hour traffic. Then the four hour drive to the lake. That would mean we'd arrive at the campground around 10:00pm to assemble tents and make dinner in the dark. Not fun.

Option 2? Stop at the nearest pharmacy and beg them to give me a vial of insulin. There are two immediate problems with this option. First, I have no prescription on me, and while my local pharmacy (who knows me, and is very familiar with Dylan's prescriptions) would do it no questions asked, other pharmacies may not. Second, all drugs in BC, including insulin, are monitored and patients are only permitted to draw them at a pre-set frequency, depending on established use. Meaning that the government computer system knows Dylan's regular insulin use, so if we suddenly try to get twice as much as normal, red flags go up. I picked up a vial the night before, plus another vial a few weeks ago, plus whatever Dylan's father might have recently ordered for his place. Would we be at our cap? There was only one way to find out.

I dragged Dylan in with me so he could show them his pump if there were any problems with the lack of prescription. Luckily the pharmacist was super understanding and immediately gave us a new vial. Yes, we were over the insurance company's drug limit, so we had to pay for the vial, but within 15 minutes we had insulin in hand and were back on our way to the campground.

A rookie mistake that I'll definitely never be making again. 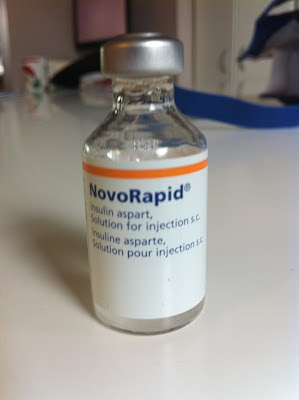 Email ThisBlogThis!Share to TwitterShare to FacebookShare to Pinterest
Labels: 365, insulin, supplies, year in the life