Diabetes Blog Week Prompt, Day 3: Today we’re going to share our most memorable diabetes day. You can take this anywhere.... your or your loved one's diagnosis, a bad low, a bad high, a big success, any day that you’d like to share.

I love that these topics are really getting me thinking...there have been so many diabetes memories, both good and bad. I could post about Dylan's diagnosis. Or about Cyclebetes, the cross-Canada cycling event I was lucky enough to participate in not once, but twice. I could write about one of the many amazing JDRF events we have partaken in, or about the day we started pumping. All worthwhile choices.

But no. Today, the memory that keeps flashing to the forefront of my brain, is of Dylan's one, and only, REALLY bad daytime low. Sure, he's had hundreds of lows, in fact, lately he gets them daily. But this low...this bad boy was different. It had attitude. It was the type of low that keep a d-parent living in fear. The type of low that makes you want to hold on to your child and not let him or her out of your sight. EVER.

One day, within the first year after Dyl was diagnosed (he was 4 years old at diagnosis), he was spending the day with grandma at her house, which is about a 10 minute drive from our house. (For the record, she is and always has been knowledgeable about Dyl's diabetes, and is one of the few people I've always been comfortable leaving Dylan alone with.) After spending the afternoon together, she was driving him home when she decided to make a quick stop at the library to drop off a few books. She pulled up in front of the building and noticed Dylan had fallen asleep in the back seat of the car. Side-note: this was a very common occurrence, and still is now. Dylan frequently falls asleep within the first minute or so of travel time. Knowing this, she left him in the car and ran the 10 or so feet to put the books in the outdoor return slot. She hopped back in the car and drove to my house. When they pulled in our driveway I could see her, from the kitchen window, struggling to get him out of the car. Again, this wasn't uncommon. He would sleep so soundly for short drives, that we would often have difficulty rousing him once we reached our destination. I saw her pulling him out of the booster seat and trying to get him to walk up the flight of stairs to the back door. And that was when I knew something was very wrong.

Normally Dylan would be disoriented after snoozing in the car, but he would still semi-wake up and stumble into the house. This time he wasn't. My mom was literally dragging him; she had both arms hooked around his chest in a sort of sideways embrace, and was attempting to pull him up the stairs, his legs and feet dragging behind. As I opened the door to help her, she apologized, explaining that he had fallen asleep in the backseat and she couldn't rouse him.

I immediately knew the truth. He wasn't sleepy, he was hypoglycemic. Between the two of us, we brought him inside and sat him on the couch. I tried, unsuccessfully, to give him dex, but he wasn't responsive enough to chew the tablets. I grabbed a juice box, rammed the straw through the metal hole, and squeezed the juice up through the straw so that it dribbled slowly into Dylan's mouth. For the first few seconds, he didn't swallow, the juice running out of his mouth and down his chin, spilling onto his t-shirt. Then suddenly, as I was about to prep the glucagon for my first real use, he swallowed a few sips of juice. Then a few more. And slowly, as if by magic, the life returned; the color slowly returned to his cheeks, the clarity to his eyes, and the control to his limbs. He was back.

Nothing, I repeat, nothing, can prepare a parent for that experience. I thought I was ready - I had done all the training, been through the procedures, I knew what to do in an emergency. But nothing I had read or studied could have prepared me for the real deal. That afternoon was the first time I TRULY understood just how unpredictable, powerful, and terrifying, diabetes could be.
Posted by Jen at 21:09 1 comment: 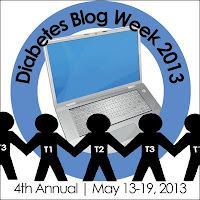 It's Day 2 of Diabetes Blog Week, and today's prompt is, "Recently various petitions have been circulating the Diabetes Online Community, so today let’s pretend to write our own. Tell us who you would write the petition to – a person, an organization, even an object (animate or inanimate) - get creative!! What are you trying to change and what have you experienced that makes you want this change?"

I, mother of a child with type 1 diabetes, hereby petition the people of planet Earth to do their absolute best to correct and/or overcome any and all preconceived and unsubstantiated notions about the cause and treatment of type 1 diabetes. This includes any misconceptions, ignorance, simplicity, incapacity, naivete, callowness, and basic lack of understanding about the disease itself, as well as how to "best" manage it, and how to reduce long term risk of type 1 complications. Examples of such ludicrous notions include, but are not limited to:

The End of My Love-Hate Relationship with Running

At the end of 2012, I decided to make some huge changes to my physical health. While I've always considered myself healthy, I knew I could feel even better, so I made 2 major changes for 2013 in terms of diet (I now eat Paleo almost exclusively) and exercise. An active person for the most part, my love-hate relationship with running has gone on too long.

For years, I have run in spurts. I'd sign up for a race, train (usually not even close to enough), run, take some time off (long enough to lose all of my fitness), and repeat. The result? I never saw any significant improvements in my running speed because I was always starting from square one; I had no consistency. The other problem with this method? No maintenance; I was always building mileage. That meant that the runs were always hard because I was pushing my body to run further or faster than before. Plus my dietary habits were causing spikes in my blood sugar that would result in brutal lows during my runs, causing me to actually fear running. No more.

Starting in January I changed the way I was running. I ran for fitness, for fun, and for stress relief, not with the goal of a specific event or race. I set goals for weekly and monthly mileage, and for number of runs per week, and I made sure I hit them week after week after week. My goals were ambitious, but not so much that they were hard to attain. January's goals were to run 75km, and to be able to run 5k without walk breaks. February's goal was 100k. March was also 100k, but with a focus on speed during the week, and on the long slow distance run on the weekend. April's goal was 125k, and by then I knew I was ready to run a 10k race and beat my previous best time. I also registered for a half-marathon May 5th with the hope of setting a PR there too.

Paleo eating has been massively helpful too. I diet of low glycemic index foods, protein at every meal, and a ratio of 35/40/25 carbs/fat/protein, keeps my blood glucose steady all day, including during runs. And with a focus on what I put in my body and when, I have drastically decreased recovery time and eliminated my need to "carb load" before long runs. My energy level is stable, by appetite is strong, and my stress level has never been lower.

Overall, these changes, albeit small, have totally transformed the way I think about diet and exercise, especially about running. For the first time ever, I wake up in the morning excited about running. It's gone from being work to being entertainment, and I celebrate and enjoy every little improvement. Finally, I have found a way to run that I know I can stick with!!
Posted by Jen at 11:11 1 comment: