One of the breakfasts offered at d-camp this year was a do-it-yourself breakfast wrap and it was a huge hit with Dyl. So much so, that he recreated this camp favorite his first morning back at home. Filled with yummy carb-less foods he loves, the only carbs found in this high-protein meal are those in the tortilla itself (33g of carbs in the flour tortilla he used). And if that's not awesome enough, he made this ALL BY HIMSELF! 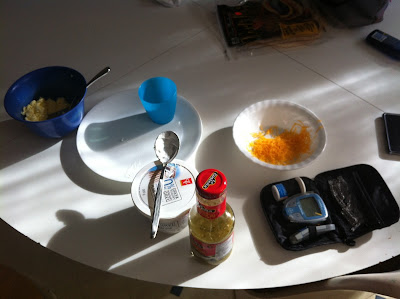 Email ThisBlogThis!Share to TwitterShare to FacebookShare to Pinterest
Labels: 365, bolus-worthy, breakfast, camp, year in the life