With each passing month, my goal to read 50 books in 2012 seems less likely to be achieved, but I'm not giving up yet. As with the previous two months, I read two books in March, one about diabetes and one work of fiction.

5. The Book of Better by Chuck Eichten 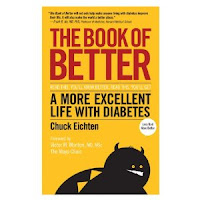 Synopsis: Over thirty years ago, Chuck Eichten was diagnosed with Type I diabetes. Now he's created the book he wishes someone had given him, compiling the (sometimes unconventional) lessons he and his doctors have learned about what you should do to make life with diabetes better, and also what you shouldn't (or, as Chuck advises his readers, "Save time, learn from the idiot"). The Book of Better doesn't look or sound like any other book on the diabetes shelf. Empowering and entertaining, it covers topics like "What is Diabetes, Exactly"?; "The Bottom Ten Worst Things about Diabetes" and "The Top Three Best Things about Diabetes," and "How to Have Diabetes and Not Have a Food Obsession."

Years of living with diabetes convinced Chuck that he and others like him don't need to feel like patients when they are reading about their condition. Like anyone, they want to understand, but they also want to be inspired, amused and entertained. Diabetes may be a painful challenge, but it can also be funny, and preposterous, and an opportunity to learn. Ultimately, Chuck's upbeat message is that diabetes is something we can make better. Infused with personality, humour and empathy, The Book of Better shows how people with diabetes and their families can make life excellent.

If I were to sum up The Book of Better in one word, unconventional would be it. With snippets of information, varying fonts and text sizes, and simple illustrations, all in tri-color ink, Eichten's book is kind of like graphic novel meets health brochure. The clearly labeled chapters makes it easy to jump around the book and return to applicable information at a later time, while the writing style, to me, screams teenager. In fact, as I was reading the book I kept thinking what a great resource it would be for a teenager recently diagnosed with type 1 diabetes. It's simple, straightforward, and accurate.

I do have a few complaints with the book, however. For starters I find the format too busy and many of the illustrations a bit redundant. I also find some of the information to be inaccurate or way oversimplified. An example is Eichten's claim that, "You can make your Type 2 diabetes GO AWAY" (pg. 138), which we know is not at all accurate (while you may be able to reduce the symptoms of type 2 diabetes, it is NOT curable or reversible. EVER).

The majority of the book focusses on insulin pumps and is written on the assumption that the reader is either already a pumper, or wants to be a pumper. And while I absolutely ADORE Dylan's insulin pump and appreciate the many ways in which it has enhanced his life, I don't like the way Eichten oversimplifies the pump. On page 161 he says, "When you start to feel low, you can simply turn down the amount of insulin you are getting. And the feeling of low blood sugar goes away. I am not making this up. It actually goes away." Are you kidding me? So I've been carrying juice boxes and a bottle of dex tabs around with me for nothing? I don't think so. In fact, I know for certain that there have been MANY incidences in which Dylan's blood sugar could ONLY has been increased with fast-acting sugar. Had we not treated the low with fast-acting sugar, Dylan would have had a seizure, gone into a coma, or worse. Suggesting a low can be combatted by reducing the amount of insulin being dispensed from the pump is just plain dangerous.

Aside from those few issues, I did enjoy the book and I certainly like its youthful appeal. Definitely a worthwhile addition to your diabetes library.

6. The Paris Wife by Paula McLain

Synopsis: A deeply evocative story of ambition and betrayal, The Wife captures a remarkable period of time and a love affair between two unforgettable people: Ernest Hemingway and his wife Hadley.

, 1920: Hadley Richardson is a quiet twenty-eight-year-old who has all but given up on love and happiness—until she meets Ernest Hemingway and her life changes forever. Following a whirlwind courtship and wedding, the pair set sail for Paris, where they become the golden couple in a lively and volatile group—the fabled “Lost Generation”—that includes Gertrude Stein, Ezra Pound, and F. Scott and Zelda Fitzgerald.

Though deeply in love, the Hemingways are ill prepared for the hard-drinking and fast-living life of Jazz Age , which hardly values traditional notions of family and monogamy. Surrounded by beautiful women and competing egos, Ernest struggles to find the voice that will earn him a place in history, pouring all the richness and intensity of his life with Hadley and their circle of friends into the novel that will become The Sun Also Rises. Hadley, meanwhile, strives to hold on to her sense of self as the demands of life with Ernest grow costly and her roles as wife, friend, and muse become more challenging. Despite their extraordinary bond, they eventually find themselves facing the ultimate crisis of their marriage—a deception that will lead to the unraveling of everything they’ve fought so hard for.

A heartbreaking portrayal of love and torn loyalty, The Paris Wife is all the more poignant because we know that, in the end, Hemingway wrote that he would rather have died than fallen in love with anyone but Hadley.

I am so happy that I read this novel after watching Midnight in  because the film provided a level of background information that enhanced my ability to visualize the story, especially the setting. Plus so many of  the literary icons, such as Hemingway, F. Scott Fitzgerald, and Gertrude Stein, are featured in both the book and film.

The novel begins with Ernest and Hadley's courtship and subsequent marriage. Almost immediately, the reader is drawn right in to the brilliant atmosphere of 1920's Paris and the wild lifestyle of 1920's literati. One cannot help but fall in love with the character of Hadley, as she struggles between fitting into her husband's life, and maintaining a part of herself. Theirs is a life of glamour, of excitement, and of great friendships.

But when their son is born, the reader knows serious problems are imminent, as Ernest makes no secret about not wanting children at this point in his life. And when the character of Pauline enters the story we know it is only a matter of time until her affair with Ernest. After all, she later becomes his second wife.

I found myself stalling, not wanting to reach the end of the book and encounter Hadley's inevitable heartbreak. At the same time, however, the realistic account is too good to put down.
Posted by Jen at 22:35