Cycling is such a terrific way to see the world, so every weekend I make sure to do one long ride. I try to do something new each time and aim to keep it around 100km. Two weekends ago I tackled the "Nanaimo Triangle," as we called it, a 112km ride from Nanaimo to Victoria, on Vancouver Island. A super ride and a perfect distance to add to my training repertoire for the upcoming Cyclebetes National Relay August 13th.

Up at 5:30, I drove out to the Tsawwassen ferry terminal, met up with a group of 16 other cyclists, and we caught the first ferry over to Duke Point, in Nanaimo. Upon arrival we headed south, following the highway for the first part of the trip. Our first scheduled stop was in Ladysmith, where we converged on the Tim Horton's for a cold drink and brief rest. 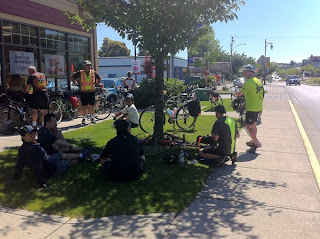 Moving south, we left the highway in Ladysmith and turned down to the waterfront route to enjoy rolling hills and peek-a-boo views of the ocean. 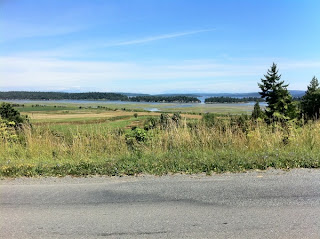 An unscheduled stop in Chemainus to take some pictures of its famous murals, and we were back on the road in no time! 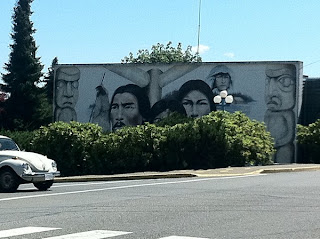 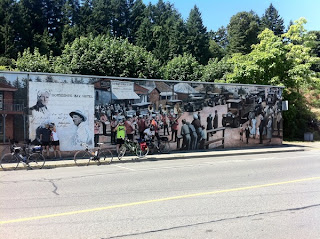 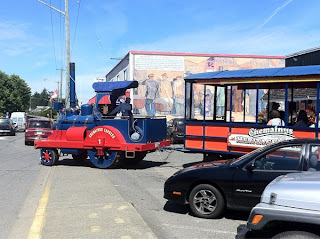 From Chemainus we continued along the waterfront route, crossing an old wooden bridge just before entering the small town of Crofton. 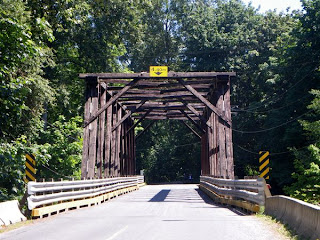 In Crofton, we broke for lunch, but not before encountering two young boys and their lemonade stand. The boys didn't know what hit them; their quiet lemonade stand was quickly transformed into a high pressure booth, as seventeen hot and sweaty cyclists lined up for a glass of ice-cold lemonade!

After a longer than planned lunch, we upped our speed a bit and pedaled towards Cowichan Bay, the next planned rest stop. By the time we reached Cowichan Bay, we were about 70km into the ride and it was very hot. 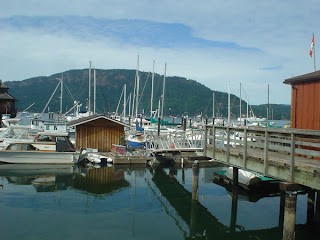 A very brief rest for a cold drink, and we were off again, allowing us one hour to travel the 21km to the Brentwood Bay ferry in Mill Bay. Seemed like more than enough time, but no one expected the elevation increase that was coming next. Immediately south of Cowichan Bay is very long and steep (15% grade) hill. Between the scorching temperature and the miles we had already logged, the majority of the riders decided to walk their bikes up the hill and save their legs for the remaining 40km+ of the ride. It turns out that this hill was only the beginning of a very hilly section, that would cause us to split into two groups for the Brentwood Bay ferry. Five of us made it to the ferry in time, and the other twelve riders missed the ferry and had to wait for the next one. Brentwood Bay ferry itself is a tiny little twenty minute ferry that travels back and forth over Mill Bay, allowing drivers to bypass downtown Victoria. 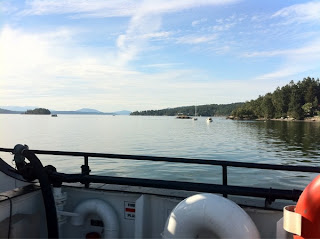 Once on the Saanich side of the ferry, our group had over ran hour to wait for the other riders, so we stopped at the Mill Bay Resort & Spa's pub to enjoy a bite and the breathtaking scenery. 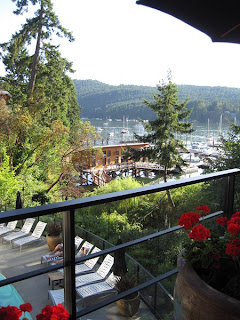 The last leg of the ride consisted of a fast 20km sprint to Swartz Bay and the ferry back to the mainland. All in all, it was 112km of gorgeous riding. What an incredible day, I will definitely be doing this ride again!
Posted by Jen at 10:19