"Excuse Me, Where is the Banting & Best Museum?"

Until recently, this questions went unanswered, as there was no museum dedicated to Banting & Best, the Canadian researchers who discovered insulin and forever changed the lives of millions of people around the world.

This week, however, that finally changed. The exhibit, entitled "Insulin: Toronto's Gift to the World," opened yesterday at the MaRS center in Toronto, Canada. It not only shows how the scientists discovered insulin, back in the summer of 1921, but outlines the continuing legacy of their work both in Toronto and around the world.

Those visiting the permanent exhibit can see a video, plus items from Banting and Best's laboratory, including scientific equipment used by the pair, as well as a collection of photographs, letters, and documents. There is even a selection of vials of insulin dating back to the 1920's.

Banting and Best's discovery is one of the most important medical advances in history, and remains today one of the "most spectacular therapies that medicine has in its arsenal." (Bliss, The Discovery of Insulin). \
Banting won the Nobel Prize in October of 1923 for his incredible contribution to medicine, but creators of the exhibit hope that it will inspire a new generation of diabetes investigators to help find the ultimate grail: a true physiological insulin replacement. 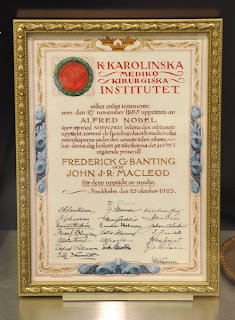 For complete article, visit http://www.healthzone.ca/health/article/1076505--exhibit-celebrates-insulin-toronto-s-gift-to-the-world.
Posted by Jen at 13:27