Breakthrough; Elizabeth Hughes, the Discovery of Insulin, and the Making of a Medical Miracle 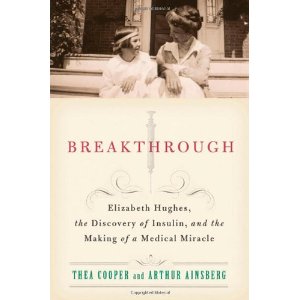 Synopsis: It is 1919 and Elizabeth Hughes, the eleven-year-old daughter of America's most-distinguished jurist and politician, Charles Evans Hughes, has been diagnosed with juvenile diabetes. It is essentially a death sentence. The only accepted form of treatment – starvation – whittles her down to forty-five pounds skin and bones. Miles away, Canadian researchers Frederick Banting and Charles Best manage to identify and purify insulin from animal pancreases – a miracle soon marred by scientific jealousy, intense business competition and fistfights. In a race against time and a ravaging disease, Elizabeth becomes one of the first diabetics to receive insulin injections – all while its discoverers and a little known pharmaceutical company struggle to make it available to the rest of the world.
Relive the heartwarming true story of the discovery of insulin as it’s never been told before. Written with authentic detail and suspense, and featuring walk-ons by William Howard Taft, Woodrow Wilson, and Eli Lilly himself, among many others.

I absolutely adored this book. As a mother of a child with type 1 diabetes, the discovery of insulin is very close to my heart, so I found it very emotional to read about one of the first insulin recipients. It essentially weaves together 3 separate, but related characters and their journeys towards the discovery of insulin. The writing itself is mediocre, but the story moves quickly, and the outcome, as we all know, is historic.

The first is, of course, Elizabeth Hughes herself, a young girl diagnosed with diabetes when the only "treatment," if you can even call it that, is a starvation diet. For a miraculous three and a half years, Elizabeth survives the diet, slowly wasting away to a mere forty-five pounds by the time she is almost fifteen years of age. Throughout it all, she is cheerful, reflective, and determined to survive.

The second plot line follows the story of her parents, Charles and Antoinette, as they struggle to comes to grips with their daughter's bleak diagnosis, while maintaining an acceptable front for Charles's political life. It is his political connections that, in the end, enable Elizabeth to meet with Frederick Banting and receive the drug she so desperately needs.

The third and final story outlines the ups and downs of Frederick Banting's historic discovery. From the original "aha" moment, to the failed dog trials, to the battles with administration, and eventual breakthrough, the reader gets a glimpse into the life of the infamous scientist.

The climax of the book is, of course, the moment in which Elizabeth and Banting first meet (see WDD: Open a Book), and she receives her very first injection of insulin. From there her recovery is nothing short of a miracle, and she goes on to live a long and healthy life as one of the world's first MDI patients. I would highly recommend this book to anyone who has ever been affected by diabetes, or who is simply curious about one of the greatest medical breakthroughs of all time.
Posted by Jen at 09:26