You Can Do This ~ From One Type 1 Parent to Another 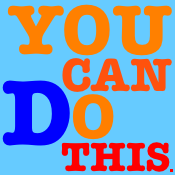 When I first heard about the "You Can Do This" project initiated by Kim Vlasnik's of Texting My Pancreas, I thought wow, what an awesome idea. And as I started to read the incredibly moving and witty vlogs and blogs created in response to the project, I was overwhelmed with respect for these brave souls who were barring their souls to share their individual diabetes stories with the world. Immediately following was an equally powerful feeling of pride as I realized, for the umteenth time, that the DOC is one of the greatest communities out there and that I am SO proud to be a part of it. With these feelings, however, came a sense of intimidation as I wondered how I could possibly add my two cents to these formidable accounts. I came up short, until last night, when I suddenly realized what this project means to me.

Last night was Dylan's end of year band concert at school. He, along with his 5 fellow "junior band" (grade 5) members, performed 4 pieces, followed by the "continuing band" (grades 6 & 7) performing 4 pieces as well. I have seen numerous school band concerts in the past, and trust me, they are not always pleasant. Listening to a group of kids who have just learned how to play musical instruments can sometimes sound more like chaos than music, but this was different. I was absolutely dumbfounded by the skill and progression this small group has made. Last September none of them could play a single note; Dylan could not even get his saxophone to make noise, let alone music! And yet here they were playing Mozart, Vivaldi, Beethoven and Grieg. It was one of my proudest moments in my near 15 years of parenting, and one I will never forget.

The focus and determination on Dylan's face as he played was so intent, that I suddenly knew what I had to offer this project. Not an account of what I've faced and overcome as a parent of a child with type 1, but an overview of what Dylan has done, in spite of diabetes. He played soccer for 3 years, from grades 2-4, and took karate at the same time, working his way up to his orange belt, before giving up the martial art due to time restraints (and he would like to resume both of these activities as soon as his schedule permits). He has taken countless sets of swimming lessons, and is headed to his third diabetes camp this summer. We also regularly go camping, hiking, cycling, walking, skiing, and geocaching as a family. He is on the school honor roll and for the past 2 years he has been part of the "gifted" program in his school district, which means that for a 1/2 day per week he goes to a different school with other "gifted" children to do more abstract challenge projects. And this past year he took up perhaps the scariest of all team sports, ice hockey, which he adores. All of this, combined with the youth ambassador work he does for JDRF, and a large group of school friends that he cares passionately about. Diabetes has accompanied us on family vacations to Las Vegas, Disneyland, Puerto Vallarta (twice), and many local destinations. With each new activity, we have faced new challenges, such as whether to suspend the pump, run a temp basal, switch to syringes, or simply remove the pump altogether, but through it all, Dylan has been positive and happy, and, to date, we have never had an A1C of over 9.0, so we're doing okay.

Dylan has done so much since being diagnosed with diabetes 5 1/2 years ago. And, more importantly, he will do so much more. He is a truly amazing child and doesn't let anything hold him back, including diabetes. Sure, it has certainly caused problems here and there, and is a constant worry on my mind, but to him, it's just life. It is a part of him, like anything else. Perhaps this is because he was only 4 when he was diagnosed; he does not remember life without diabetes. But I think that more likely it's because of his attitude. He truly believes he can accomplish anything. And he will. His career goal? To be a doctor, so that he find the cure for type 1 diabetes.

So to everyone affected by diabetes, take it from Dylan: You Can Do This!
Posted by Jen at 22:20