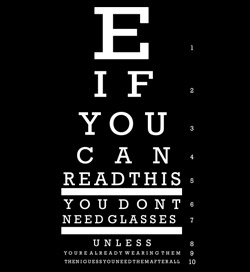 Headaches can be quite a nuisance, and trying to identify their cause can be equally annoying. As I posted yesterday in Blame Diabetes, Dylan has been getting frequent headaches for the past few months and we have been unable to figure out why.

Originally I assumed they were blood sugar related, but after some simple tracking I quickly ruled out diabetes as a source. My next thought was that they were an allergic reaction to something. We saw our family doctor and he gave us some suggestions on how to check for a food allergy, but so far we've come up empty-handed. Dylan is currently on a waiting list to see a pediatric allergist, but the wait is almost a year, so it will likely be autumn before we get in.

Then Dylan came home from school a few weeks ago complaining that he was having difficulty seeing the overhead projector screen from his desk, leading me to think he was straining his eyes and needed glasses. He was due for his annual eye exam anyway, so we went in yesterday to see the optometrist. Another strike-out. Dylan's eyes are close to perfect, and while he has a -.25 in each eye, it is not enough to warrant glasses or to cause headaches. The optometrist was not at all concerned, and informed us that vision can fluctuate a little bit during growth spurts, and with diabetes. He expects it will stay the same or return to normal by next year's appointment.

I'm happy for Dylan that he doesn't need glasses (he really didn't want them), but I'm frustrated that we still have no idea what is causing his headaches. He has his quarterly DEC appointment (A1c test and visit with the diabetes team) tomorrow morning, so maybe his endo will have some answers.

And for the record, the results of his pupil dilation test (to check to any signs of diabetic retinopathy) were perfect. His eyes show no signs of any problems whatsoever.
Posted by Jen at 13:15