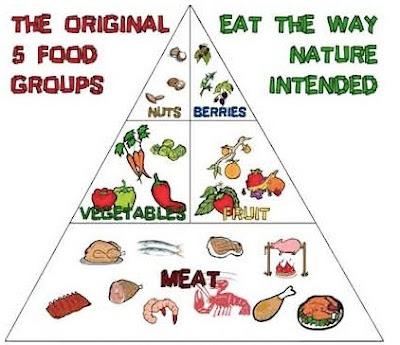 As a parent of a type 1 child, I am acutely aware of what foods my son puts in his body. Every food contains its own nutritional value and, as a parent and caregiver, I try to maximize Dylan's nutritional intake to ensure that he is as healthy as possible.

So a few months ago, when I heard about the Paleo diet in a CWD (Children with Diabetes) discussion group, my interest was piqued. It appeared that type 1 kids who ate predominantly paleo were reducing their insulin requirements by 50% or even more! The skeptic in me immediately doubted the validity of these claims. However, as I started researching, I found more and more scientific evidence to support this way of eating, not just for type 1's, but for everyone. Then I learned that a number of my coworkers (and some of the healthiest and fittest people I know) have been eating Paleo for years.

For those who may not have heard of Paleo before, it is a dietary plan based on the eating patterns of man during the Paleolithic Era. Basically, only foods available during that hunter/gatherer time are permitted. Commonly consumed items are fish, grass-fed meats, vegetables, fungi, nuts, seeds, and fruit. Excluded foods are grains, dairy, legumes, salt, refined sugar, and processed oils. Still not sure I understood completely, my next step was to read "Quantum Paleo" by Dr. Doug Willen and really get my head around what the diet actually entailed; what foods were "in," and which were "out."

After careful consideration, I've decided to try it out. Willen suggests a 21 day trial period, which is what I intend to do, starting today. During the 21 days, I will eat entirely paleo, but expose my family, including Dylan, to a variety of paleo meals and see how it goes. If I like it, I'll stick with it permanently; if Dylan likes it, I will start him on a complete paleo diet as well.