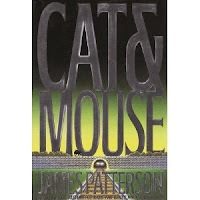 Couldn't find a physical copy of Jack & Jill, the third installment in the Alex Cross series, in my local library, so I put one of one of their three downloadable copies on hold, but that was almost 3 weeks ago, and I'm still waiting for notification that a copy is ready for download. In the meantime, I skipped ahead to the fourth installment in the series, Cat & Mouse. There is nothing in book four that ruins book three if read out of order. After all, the books are written so that the reader can start reading any book in the series and not be lost. Each book contains adequate explanation in the first few chapters to provide the reader with enough background information. That being said, I would still really like to read Jack & Jill once it's available for download.

He's baaaaaack! Gary Soneji, that is. After escaping from prison, Soneji returns to wrap up his unfinished business with Alex Cross. Add to that a second, and completely independent serial killer, Mr. Smith, and Cross has his work cut out for himself. Then there is the matter of Christine Johnson, the principal of Cross's kids' school, and the widow of one of the victims of book three.

This book was okay, but not nearly as captivating as its predecessors. In my opinion, Patterson has attempted to cram too much into this novel, resulting in a disjointed plot that jumps back and forth between two continents, and two killers. The subplot of Cross's relationship with Johnson, however, is both necessary and enjoyable, and is poised to become a critical turning point in Cross's career and personal life.
Posted by Jen at 00:22