What could these three things possibly have in common, you might ask? Most of the time, nothing, but last weekend they were all present at one common location, an amusement park.We took the kids to Playland this past Saturday, to enjoy the fair before it closes for the season at the end of September.

Playland is our local amusement, complete with rides, an arcade, carnival games, and way too much of junk food. Plus, we've been experiencing a little heat wave in BC the past week, with temperatures much higher than normal for September. The predicted high for Saturday was 28 degrees Celsius, or 82.4 Fahrenheit, but the actual temperature was closer to 30 degrees (86 F). While this isn't scorching, it's more than hot enough to affect Dyl's blood sugar level. He tends to get low more quickly in the heat, plus at an amusement park there can be a lot of walking involved, so I was bit worried.

The easiest to prevent Dyl from getting low in the heat (other than staying inside), is to keep him hydrated with cool, carb free fluids, so that's what we did. We found these awesome giant refillable plastic cups that can be purchased for $10.00 and then refilled an unlimited number of times. So we immediately got one for each of the kids and every time we passed by one of the concession booths, Dyl would refill his cup with diet coke. In the end, he drank 4 of these gigantic cups of diet coke in a 4 hour period. A bit heavy on the caffeine, yes, but better than being low. And actually, he was still marginally low at one point. Nothing a few mini donuts didn't fix! 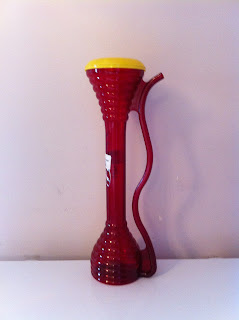