Not Dead Yet ~ Phil Southerland Turns 30! 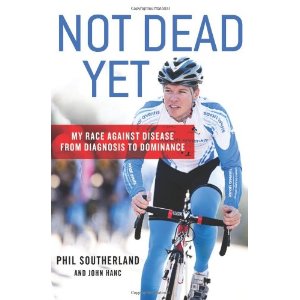 Synopsis: Part memoir, part sports adventure, Not Dead Yet tells the inspirational story of Phil Southerland’s battle with Type 1 diabetes and how from diagnosis to sheer determination, Phil Southerland beat all odds and turned his diagnosis and his passion for cycling into a platform.  From leading a Race Across America to now managing a world-class cycling program, his journey on and off the bike is changing the way the world views diabetes.


When Phil Southerland was seven-months-old, he lost ten pounds in a week, his body was limp and his breathing slowed to what his mother called a “death rattle.” Rushing him to the ER, she was informed that tiny Phil displayed the youngest case of diabetes on record in the world at that time.


Blindness, kidney failure and death were all predicted for him by age twenty-five. Twenty-nine years later, not only is Phil alive and well but as the founder of Team Type 1, he and his team of championship cyclists — many of them diabetics—have become health and fitness role models for people the world over.
Together, they have taken on some of the most challenging endurance events in the world, including winning the Race Across America—a grueling 3,000-mile endurance competition—twice. Today, Phil continues to lead Team Type 1 as its professional cycling team, among one of the top 30 teams in the world, races toward an invite to the world’s top cycling event, the Tour de France in 2012.  Leading the pack is a serious challenge for any athlete, but for Phil and his teammates, it presents two daily battles: one to stay in razor-sharp race-fit condition, the other, to stay alive.
Not Dead Yet is Phil’s powerful story: his account of his relationship with his mother, and how she struggled to keep him alive; growing up quickly in the New-Old South of the 1990s, learning at the tender age of 6 years old how to check his glucose and give himself injections; of how he fulfilled his dream of becoming a professional athlete using his team and the bike as a platform, inspiring thousands of individuals and families around the world who are battling diabetes to not just chase, but catch, their dreams.


As an avid road cyclist and the mom of a type 1 child, I absolutely adored reading this book. I found that once I started reading, I had a hard time putting it down. It was fascinating to learn about Phil's rise to professional road racing, and to discover how he has owned his diabetes care since the age of 6 years old. Diagnosed with type 1 diabetes at only 7 months old, Phil's mother Joanna was told that Phil would not likely survive past the age of 25, and that if did somehow survive, it would with complications, such as blindness or kidney failure. This past Sunday, January 15th, Phil turned 30 years old.

Phil's insights into living with diabetes are remarkable. His discipline and determination to maintain control of his disease, and be the "CEO" of his body, as he puts it, are outstanding. From the tender age of 6, Phil has been giving himself insulin shots multiple times per day. He has learned how to maintain the delicate balance between insulin, carbohydrate intake, and exercise, in order to maximize his health and athletic success.

As a cyclist, Phil started where many start: at the bottom. As a teenager he hung out in bike shops, tagging along for mountain bike group rides whenever possible. As his strength and endurance improved, so did his success. He switched from mountain biking to road racing and slowly climbed up the categories, winning many races, until finally reaching the professional level.

Team Type 1 is Phil Southerland's baby. He not only created it, but races as part of the team, while also being the CEO and handling much of the management duties. Team Type 1 has grown exponentially and is made up of both men's and women's teams, as well a running team and a triathlon team! Their current goal is to get the men's elite team into the Tour de France for 2012! I certainly hope they are successful!

Similar to Lance Armstrong's "It's Not About the Bike," "Not Dead Yet" documents Phil's life from childhood to adulthood, and from amateur to professional cyclist, through all of which he has type 1 diabetes. An inspiring and admirable story, I would highly recommend "Not Dead Yet"to cyclists, to anyone who is affected by type 1 diabetes, and to those who simply love a good hero story.

Happy birthday Phil. And thanks for teaching me that when I put my mind to something, truly anything is possible.
Posted by Jen at 12:21