What Happens in Vegas...A Diabetes Tale 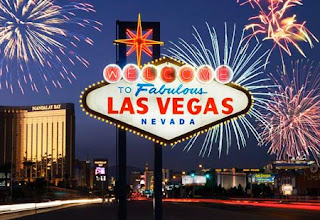 December 31st, 2011, marked the 9th anniversary of the day my husband and I started dating. It's not our wedding anniversary (which will be 5 years this coming April), but we celebrate both dates each year. Strangely enough my husband always remembers the New Year's Eve date before I do, yet I always remember the wedding anniversary. Or maybe that isn't so strange? A girl and her wedding share a pretty big memory after all.
Over the course of New Year's Eve last weekend I started thinking about the wedding day itself and as I thought about the events of the day, I suddenly remembered a diabetes story I had completely forgotten about.
My hubby and I got married in Vegas (an hour north of Vegas to be exact), at what used to be an old horse ranch, but is now strictly used for weddings. It was not a spur of the moment, typical Vegas wedding like you see in the movies. We planned it well in advance and chose Vegas for a number of reasons: we wanted a destination wedding, we wanted to keep the guest list small (had we gotten married at home our guest list would have had about 250 people on it because we both come from HUGE families), we could count on the weather, and I loved that Vegas offered these incredible wedding packages that take care of ALL of the planning. All we had to do was show up, dressed, with guests, rings, and a marriage license, and they took care of the rest - flowers (including bouquets and boutonnieres) video, photos, minister, location, decorations, limo, a private bus for guests, even champagne.
Dylan had been diagnosed with diabetes almost a year and a half before the wedding and was still on MDIs (multiple daily injections). It was the first time we had ever traveled more than a couple of hours from home, not to mention internationally, since his diagnosis. I thought I was prepared. I had all of the necessary paperwork to get his supplies through customs, and I had snacks and dex to treat low blood sugars on the plane, if needed. I also left extra fast-acting sugar with my mother and with my maid of honor, to ensure that no matter who he was with, we would be covered. And my immediate family had all been trained on how to test his blood, give him injections if needed, and recognize signs of low blood sugar. After all, he was only 6 at this point and wasn't nearly as independent with his d-care as he is now. Plus, he wouldn't be with me every minute of the trip.
All three of my children were involved in the wedding itself. They got ready with me, rode in the limo to the site with me, and stood with me during the vows. The wedding itself was beautiful, but for the purposes of this post, it was what happened after the wedding that I remembered a few days ago. Once the on-site photos were done, my hubby and I, along with his best man (and his spouse), and my maid of honor (and her spouse), rode in the limo back to Vegas to take more pictures at the Bellagio. The remaining 40 guests, including my kids, rode together in the tour bus for the hour or so trip back into the city. About halfway back, Dylan got very pale and started to sweat (his typical signs of a low). My mom, who was sitting with him, reached for his tester, only to realize that it was in the limo with me, as was the dex. She could tell from lookig at him that he was low, and he said he felt low, but he thought he'd ok for a bit longer. Did I mention it was about 4:30pm on a Friday afternoon at this point. Traffic crawled along the highway, slowly inching towards the city, as Dylan's low became more and more apparent. My mom asked around the bus - did anyone have any candies in their purse, or anything that might have a few carbs? No one did. It was 99 degrees outside and everyone had brought the absolute minimum to the outdoor ceremony.
My uncle, who was also to be the wedding MC at the reception later that evening, asked the bus driver to get off the highway at the next exit. But because it was a prearranged pick up and drop off, the driver refused, saying he was on a strict schedule. My uncle Earl, bless his heart, refused to take no for an answer. And luckily for Dylan, Earl has a special way with people. He has a big powerful voice, and is scared of nothing or no one, and as a former professional football player, he's not exactly a small man. So he explained that Dylan had diabetes and needed fast-acting sugar immediately, that Dylan's life, in fact, depended on it, and asked the driver again, to please pull of the highway and stop at the nearest convenience store. Again the driver refused. At this point, Earl stood up, towering over the driver, and told him that either he pull of the highway immediately, or Earl would "make him pull over." Thankfully, for everyone involved, the driver complied, they found a 7-11 at the next exit and Dylan quickly downed a bottle of orange juice. Within minutes, he felt fine and by the time I saw them an hour later at the restaurant downtown, Dylan was laughing about the event. Can't say I was, but we learned a number of valuable lessons that day, one of which being that diabetes never sleeps. And it never takes a vacation. Even when mommy gets married.
Posted by Jen at 21:21