Today we got some news we've been anxiously awaiting for the past few weeks. Private health insurance is going to cover the cost of sensors, so Dylan can go on a CGMs! They will not cover the actual cost of the transmitter itself, but will cover 80% of the ongoing sensor cost, with no annual limit.

In BC, Canada, the provincial government covers the cost of insulin pumps and supplies for most kids (less an annual deductible based on family income), but they do not cover any part of Continuous Glucose Monitoring Systems because they are considered "luxury," or non-mandatory equipment. Most private insurance companies also cover the pump cost and supplies, but very few cover CGMs, so we were thrilled to hear that ours will cover the sensors. The sensors for Dylan's Minimed VEO are approximately $50 each, and last for about a week, so we would be looking at about $2600 a year without insurance coverage. We'll only be paying about $500 of that cost. Not bad!
I am super excited to get Dylan wearing a CGM because he just got the new VEO in December (after 4 years with the Minimed 522) and it is the only pump in the world with the "Low Glucose Suspend" feature, meaning the pump will automatically shut off for 2 hours when Dylan's blood sugar goes below a preset range. For a child who is prone to hypoglycemic seizures at night, this is an incredibly helpful feature. 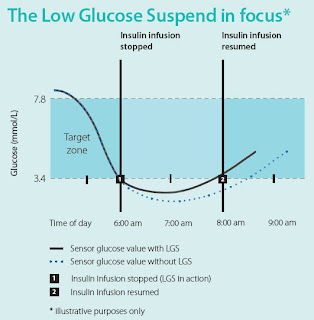 More news to come, once we get the CGM and start using it!
Full information on the Minimed VEO can be found here.
Posted by Jen at 17:12